Every now and then I get thrown a curveball.

As I have been working on Gideon Hawke #5, I have known something was missing. Having outlined the story, I knew I had failed to grasp some compelling aspect of the Revolutionary War in first half of 1778.

Not that the material is not there! There is the almost mythical winter at Valley Forge, the “rebirth” of the Continental Army, the shockwaves caused by the French entry into the war (and the subsequent British strategic realignment), the British evacuation of Philadelphia, and the ensuing clash at Monmouth Courthouse (also steeped in myth and legend).

A consultation with a historian at the Valley Forge National Historical Park pointed me toward some sources I had not considered, and that tip proved crucial.

As I read Wayne Bodle’s The Valley Forge Winter: Civilians and Soldiers in War I realized that I had gone somewhat astray…I had bought into too much of the myth, and was trying to reconstruct the mythical Valley Forge, rather than the actual Valley Forge. The research I had done thus far had seemed less than useful not because it was not accurate, but because it did not fit my preconceptions. 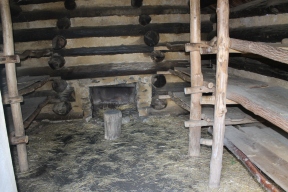 organization. It lacked the polish and uniformity of its foes, but it made the most of what it had. So it was at Valley Forge: the Continental Army endured an unpleasant winter, and it suffered at various times from shortages of food and supplies, but it was still a veteran force that made the most of what was at hand. Yes, Baron von Steuben lent a hand in training it, but would have trained without him. Had von Steuben, in his red coat, been clapped in irons upon arrival in America (as he almost was), I don’t think it would have changed the outcome at Monmouth…the Continental Army would have stood and fought stubbornly. Perhaps von Steuben gave the Continentals a bit more confidence, but I think his real contribution came later in the form of the standardized policies and procedures that made amateurs into professionals.

Now…I have an outline to fix!

The Valley Forge Winter: Civilians and Soldiers in War on Goodreads: https://www.goodreads.com/book/show/606475.The_Valley_Forge_Winter