What do you think of when you hear the term “historical research”? Many people would likely visualize a quiet library, or a stack of books, or even a computer monitor. I certainly use all of those, but when writing historical fiction I feel there is no substitute for visiting the scene of the action.

I have been fortunate in that at one point or another I have been able to travel to most of the sites I have written about, but my recent visit to the Saratoga Battlefield was by far the most satisfying visit for two reasons. First of all, the battlefield is well-preserved. The man-made structures have disappeared, and the vegetation has changed somewhat, but the topography is generally as it was 239 years ago. Secondly, I was able to thoroughly prepare for this visit as I had not prepared for visits to Trenton, Princeton, Washington’s Crossing, New Brunswick, and so on. That preparation was priceless. 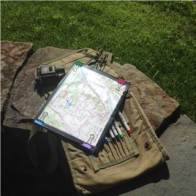 Tools of the trade

I had already read up on the Battles of Saratoga; there were many engagements in the Saratoga Campaign, but the “Battle” generally includes the actions on September 19th, 1777 (a.k.a. The Battle of Freeman’s Farm) and October 7th, 1777 (a.k.a. The Battle of Bemis Heights). Once I realized I would be able to make a trip to visit the site, I procured a topographic map of the area from My Topo. The My Topo site produced a map in a scale and format very familiar to me; through many years in the Army I used similar topographical maps to plan and navigate on several continents, so my “Saratoga Special” spoke to me in a very familiar language.

I read more, and used the nuggets of information in several books to better understand the timing and sequencing of events. By comparing my notes and the maps in the various books with my topographical map, I was able to narrow down the spacing: precisely WHERE various events occurred. The contour information and precise scale on the topographical map was critical here, as it helps make sense of lines of sight, ranges, and difficulties of the ground. When I thought I had it sorted out, I went so far as to sketch out the sequence of events on transparent overlays over the map, enabling me to visualize the ebb and flow of the fighting.

Then came the big day! Map, notebook, and camera in hand–and with generous applications of sunscreen and bug spray–I set out early to arrive at the Visitor’s Center as it opened. The center is small, and houses a limited but very nice collection of artifacts and dioramas, but I found the 20-minute LED Map presentation to be invaluable. Based on extensive studies of the battlefield and historical record, it corrected a few misperceptions and definitely enhanced my understanding of unit locations and the sequence of events.

Finally it was time to hit the road. I was able to follow trails and paths to find key locations 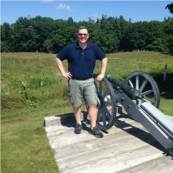 where the battle unfolded. It was truly humbling to stand on the very ground where men like Daniel Morgan, Simon Fraser, Enoch Poor, at thousands of others fought gallantly for their respective causes, and where so many gave the last full measure of devotion. I am especially indebted to park Ranger Douglas Bicket, who clarified several points and helped me understand how the field had changed, and had not, since 1777.

Being particularly interested in the actions of Daniel Morgan’s Rifle Corps, I focused on retracing their steps as best I could. The vegetation around what was Freeman’s Farm made it a bit difficult to fully envision what Morgan and his men saw on September 19th, but that was a revelation in itself. In that broken, wooded, ground I could see how Morgan’s men were able to fire the first shots of the battle and then run headlong into the might of the British Center Column. To my even greater delight I was fully able to reconstruct the events of October 7th, especially the approach to and assault upon the 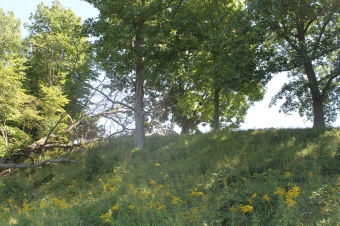 Looking up the slope toward the Hessian positions

Breymann Redoubt. The books may not all agree with my interpretation, but knowing what the Rifle Corps accomplished that day, and having studied and used terrain as a professional soldier, I found myself sliding around the northern flank of the redoubt, into a shallow draw, with a steep slope leading up to the location of the Jäger Outpost and Hessian Light Infantry positions. Standing at the base of that slope, with one of the National Park Service’s white markers just peeping over the top, I was absolutely certain this was the way a tactician as astute as Morgan would have led his men. After I scaled the slope and stood inside what had been the Jäger Outpost, I was even more certain this was the spot where Morgan’s men actually swarmed over the Hessian defenses, precipitating the collapse of the British and German line and sealing the fate of Burgoyne’s Army. Of course I can’t be sure I got it 100% right, but if anyone disagrees with my interpretation I’d happily meet them on the field and have a friendly discussion about it; I think the facts on the ground would speak for themselves. 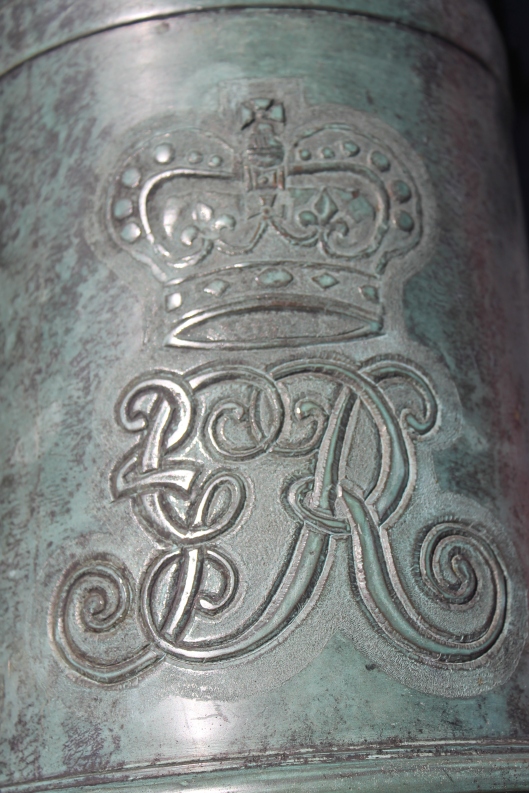 One of His Majesty’s cannon

Happily, the only hazards I faced during my visit to Saratoga were dehydration, sunburn, thorns, and bug bites, all of which I am happy to report I overcame. 239 years ago, for a few hours, that hallowed ground was a much more dangerous place. I will dedicate the fourth Gideon Hawke novel to memory of those, on both sides, who braved shot, shell, and cold steel on the fields of Saratoga.