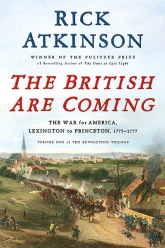 Some writers might find it counterintuitive to plug other writers’ work, but for me it is only fitting. Rick Atkinson is a best-selling author and has won the Pulitzer Prize for both Journalism and History. I have had the pleasure of interacting with Mr. Atkinson on two occasions, and both were rewarding.

The first was around 2005. He was speaking to my class at the Army Staff College, and I had the honor of introducing him. We chatted only briefly, but I found him to be knowledgeable, articulate, and personable.

More significantly, perhaps, about ten years later when I was struggling through publication of my first novel, This Glorious Cause, it occurred to me to reach out to Rick Atkinson for advice. I thought it a long shot, but to my surprise and delight, he responded to my email very quickly, and was immensely supportive. His support had such an impact on me that I vowed to pay it forward. I have, in fact, been able to offer at least a little bit of advice to several aspiring authors, ranging in age from teenager to sixty-something.
When I contacted Mr. Atkinson, he had begun work on a trilogy about the American Revolution. That trilogy has finally come to fruition! The British are Coming is available for pre-order!

With his Liberation Trilogy, Rick Atkinson shone a new light on the Second World War. I cannot wait to see what he has done with the American War of Independence. If you enjoy the Gideon Hawke Series and want to learn more about the Revolution, I can think of no better place to start.